The History of The Hackers Guild Part 4: The Redesign

As part of the lead up to the original kickstarter, I contracted with Michael Mihealsick and Jonathan Sugiyama of Coalition Game Studios to do some blind playtesting for me. However, after three sessions, they determined that the length of the game was going to make it difficult to meet their commitment in any reasonable amount of time. Instead, I contracted with them to have them help jump start the redesign process of The Hackers Guild.

With their help, the following objectives were set for the redesign:

I will admit that my original plan for the redesign was a quick overhaul that would have the game back on Kickstarter in early 2018. However, after reviewing the report I got from Coalition Game Studios and looking over our redesign objectives, it became obvious that this was going to need to be a major overhaul of the mechanics as well as the components.

One of the first things to change was the hack resolution mechanic. The Kickstarted version of The Hackers Guild involved completing hacks by rolling regular D6s to form different patterns like pairs, all odd, all even, runs, full house, etc. It had a definite Yahtzee feel to it, but did have some dice mitigation in form of Hacking Tools that could be purchased and allowed the hackers to re-roll dice, flip dice, split dice, and set dice.

Another early change was to remove the hardware tracks from the player mats, and have each hacker focus solely on their asymmetric hacker power. Early versions had a similar mechanic applied to the team of hackers as a whole, but eventually it was dropped altogether.

The world is our playground 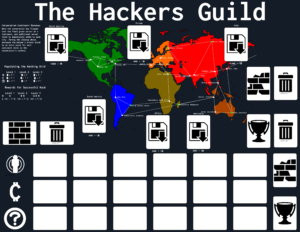 When I started designing The Hackers Guild, I decided that it was going to use worker placement as one of its core mechanics quite early. To help support the mechanic, the game board was designed with specific spots on the board for the players to place their workers. The problem was that it didn’t give anything interesting to look at, and didn’t help in thematic immersion.

A simple solution was to turn the board into a map of some sort. The exact details have evolved over the last year, but I finally settled on a simple world map. This also lead to continent bonuses, the “liberate the world” mini game, and lent itself really well to the Event card mechanic.

Protospiel-MN 2017 and learning to let go

At the end of January 2017, I had the opportunity to attend Protospiel-MN in Minneapolis. It was an awesome weekend, and I had the chance to meet some great people. More details on the weekend can be found in part 18 of the I Have a Board Game Idea, Now What series.

The big change that came out of the weekend was the realization that the Network Administrator role wasn’t feasible and needed to be removed. This was something that I had been struggling with, and had suggested to me a couple different times by different people. It definitely was the best choice and has made the game play that much better.

Replacing the Target deck with hack modifiers and bonus rewards

The last fairly major change to have been made was removing the Target cards, and instead using Hack Modifiers and Bonus Rewards to help make each hack attempt unique. This change served to streamline the hack resolution process, but still gives the hackers means for earning extra rewards in addition to the common base rewards.

Well this brings us to the end of this mini series. I hope you enjoyed learning more about my journey designing The Hackers Guild. I would love to hear about your design stories, and some of the lessons you’ve learned along the way. Keep an eye out for the next installment in the main I Have a Board Game Idea, Now What? series.

Until next time, happy designing!