I Have a Board Game Idea, Now What? Part 35: 5 Strategies to Generating Buzz for Your Campaign

Welcome back! I hope you had a productive week!

Anyone looking for advice on running a successful campaign will likely be given advice something along the lines of “make sure you have enough of a crowd ready to back day one before you launch”. While this advice still holds true, there is some debate as to the necessary size of that crowd. One thing I feel that doesn’t get talked about enough directly is the important part generating buzz can play in the success of your campaign. For today’s article, I want to look at 5 strategies for increasing the buzz surrounding your campaign. 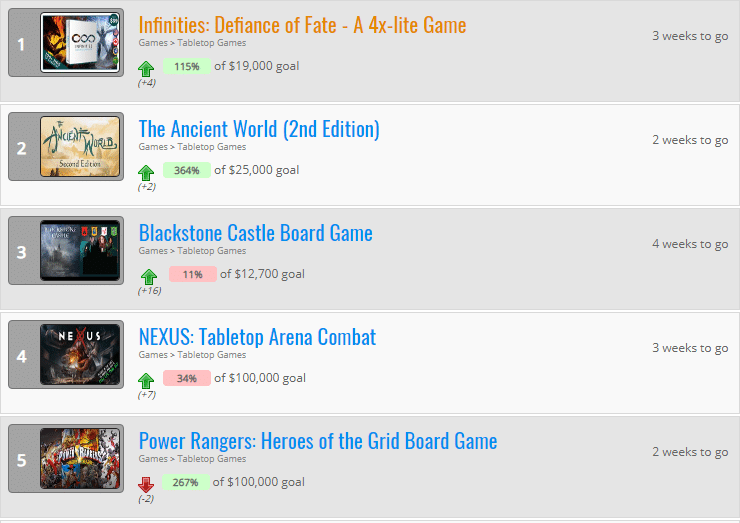 Kicktraq is a website that provides analytics on all of the projects on Kickstarter. Since starting in 2012, Kicktraq has tracked over 415,691 Kickstarter projects with over one million unique individuals per month viewing data generated by Kicktraq. One of the available features on the website is their “Hot List”. While this list can be gamed a little (as it depends on counting clicks of the visit project button from the campaign page on Kicktraq), it can be a good source of backers and general buzz campaign that shouldn’t be ignored.

This was a new strategy to me when I first heard about it from my friend Steven Berry from Vatal Entertainment Studios as one of the things they were planning on using on their current kickstarter campaign for Infinities: Defiance of Fate. The idea is to provide upgrades to all of the games printed based on reaching certain funding levels within the first day or two of the campaign. These offer the benefits of early birds, without the feeling of missing out if you back later which is a big down side of early birds. It seems to have worked well for them, and I’m looking forward to see where this idea goes from here (including probably making an appearance on The Hackers Guild project page).

Stretch goals have become almost a must have for Kickstarter campaigns, but doesn’t mean that there aren’t still some innovation on this front. Some recent interesting twists have included:

Regardless of what option you choose, stretch goals can be an awesome source of momentum for your campaign, as well as a excellent source for community building and a feeling of improving something in one big group effort. The big thing to remember about stretch goals is to ensure that you plan ahead carefully for each campaign.

Strong community engagement can be another great source for building buzz around you game. This is also an opportunity to be a little creative, but like stretch goals, make sure you plan everything out really carefully. One recent development in this category is the idea of creating an ongoing campaign metagame that gets everyone involved, and can possibly be tied to additional content. An excellent example of how this can be successful is the Trickerion: Dahgaards Academy campaign from earlier this year.

Exclusive and limited content can be a hot topic in the world of Kickstarter, similar to the discussion surrounding early birds. However, when carefully planned for they can be a huge conversation piece and an excellent source of campaign buzz.

That is it for this week’s post. I would love to hear your thoughts on what I’ve shared, as well as any other insight you want to provide on the importance of buzz to a campaign’s success. Unless next time, happy designing.