I Have A Board Game Idea, Now What? Part 49: Another Look at the Indie Game Alliance (IGA)

Welcome back! I hope you had a wonderful and productive week.

With the announcement of a new membership tier for the Indie Game Alliance (IGA) yesterday, I thought it was a good time to take another look at all the IGA has to offer. I first introduced you to the IGA in part 16 of this series with an interview with the founder of the IGA Matt Holden. This week I want to dig a little deeper into some of the services they offer and discuss why one would want to join.

What exactly is the IGA?

The IGA is an international team comprised of independent designers, publishers, writers, artists, and most importantly, players. The main objective of the IGA is to work together to secure lower prices and share common efforts that could benefit all, to allow smaller companies to be on more level footing with bigger ones.

The IGA is divided into two main groups: game designers/publishers, and the minions. Game designer/publisher members are those who take advantage of the majority of the services that the IGA offers, including the playtesting and demo services offered by the minions.

The minions are a group of gamers who earn free games by demoing the games created by the designer/publishers, as well as help with the playtesting services offered by the IGA.

So you’ve eluded to the services offered by the IGA and the minions. What exactly does the IGA offer and how much does this all cost?

The IGA offers a number of awesome services that include:

Game designers/publishers are broken into three categories: IGA Starter(Free), IGA Lite($10 USD/month), and IGA Pro ($30 USD/month). A complete breakdown of which services are available for which membership categories is shown below. 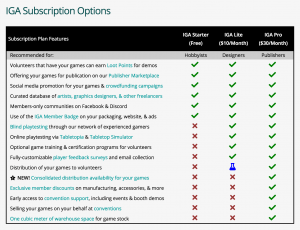 Sounds great, but I’m still not sure it’s quite worth the money.

I can understand that margins can be pretty tight as an indie publisher. That said, I’ve been more than happy with my membership. Its enabled The Hackers Guild to be at GenCon for the last 3 years when I wasn’t, as well as dropped my Kickstarter goal by about $5000 due to all of the discounts available. But don’t just take my word for it, here is what others are saying:

Island Dice recently funded on Kickstarter due to the great support of the Indie Game Alliance. With their many member studios and the outreach of their volunteer network, Island Dice was able to get a much wider range of exposure. From the very beginning of the Kickstarter process though the very end and even continuing now, they are there to help. Some of the many examples include: consultation about every last detail of the Kickstarter campaign, exposure via social media, conventions and word of mouth, and cost analysis for manufacturing. IGA has helped Island Dice and many other projects get their deserved funding. I am proud to be a member of the Alliance and will be continuing with them in future projects. — Jason Gough, Casual Dragon Games

Thank you for your support on (VENOM Assault)! You guys do amazing work for small game publishers and deserve a round of applause! — Michael Knight, Spyglass Names

So excited about IGA and their new playtesting service. For me, the feedback will be useful but getting “early adopters” excited is also really important. Congrats Matt and Victoria! — Joey Vigour, Vigour Inc.

So that’s it for this week. I hope you have learned something new, and might consider joining the IGA! If you have any questions, please leave them in the comments and I will try and answer them. I’d also love to hear you experiences with the IGA if you are a member. Until next time, happy designing.