Welcome back! I hope you had a great week filled with lots of board games and time with family and friends. 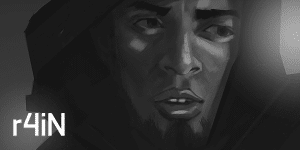 R4in spent most of his childhood living on the streets of Rio de Janeiro, thinking that his parents had abandoned him as a small child. He later discovers that they had been killed for testifying against the Portuguese mafia, and in order to protect him, he was kept out of the system.

Soon after this discovery, R4in learns that his parent’s efforts to protect him weren’t completely successful and that the mafia was after him. He manages to escape to Boston, earns a degree in network security, and launches a successful network and internet security firm.

R4in first met Ghost in 2110 in Sydney on a business trip and agrees to help her discover the truth about her parent’s death. They form the Hackers Guild in 2116 in an effort to help others in similar situations, and to help rid the world of corporate greed.