Welcome back! I hope you have a productive week with some time for family, friends, and of course gaming.

For this week’s blog post we continue our The Lore of The Hackers Guild blog series with the introduction of another hacker persona, the Disillusioned rich kid Josephine (Josie) Reed aka G4mma. 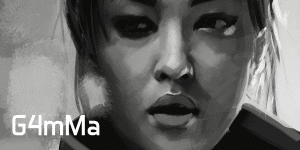 Born in Boston, MA USA on Sunday, January 21, 2091. Gamma is the daughter of former VP of Research and Development of Mononlith Global Inc and has lived a life of prominence and luxury. However, at 16 Gamma started becoming disillusioned with her life and her place in the world after witnessing first hand some of the poverty and malnutrition that was still happening in rural areas of Africa.

Three years later, Gamma’s father was demoted at work after publicly criticizing Monolith Global’s investment into artificial intelligence research and development. Further disillusionment and public criticism led to his dismissal in June of 2115, at which point he was certain the intentions of Monolith Global’s AI development were sinister. Gamma and her father joined the Hackers Guild at the end of Jun 2116.