The Lore of The Hackers Guild Part 5: Introducing the Guild’s Inside Man Charles Weber, aka Kappa

Welcome back! I hope you had a great week.

For this week’s blog post we continue our Lore of The Hackers Guild blog series with the introduction of the next hacker persona, the guild’s Inside Man Chares Weber aka Kappa. 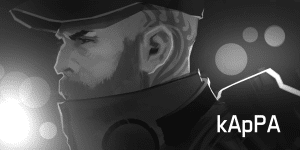 Born in London, England on Saturday, February 5th, 2084. Kappa is the UK’s leading expert in artificial intelligence and holds multiple masters degrees in computer science, mechanical engineering, and electrical engineering. Kappa was hired to replace Gamma’s father as VP of Research and Development at Monolith Global Inc and to head their efforts in developing applications for artificial intelligence.

Shortly before he was fired, Gamma’s father confided in Kappa his concerns over where the AI program was going. Kappa at first dismissed his concerns, but over the next 3 years, Kappa became more and more suspicious. Finally, in December of 2118, Kappa reached out to his former employee and was brought into contact with the Hackers Guild. It was decided that it would be advantageous for Kappa to remain employed at Monolith Global, and it was Kappa that informed the guild of Monolith Global’s true intentions behind installing their artificially intelligent machines into the new worldwide government.