The Lore of The Hackers Guild Part 6: Introducing The Spy Turned Activist Anisa Khalid aka Prophet

Welcome back! I hope you had a great week.

For this week’s blog post we continue our Lore of The Hackers Guild blog series with the introduction of the next hacker persona, the spy turned activist Anisa Khalid aka Prophet. 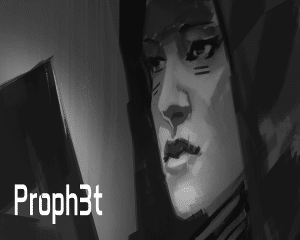 Born Thursday, November 25, 2088, in Cairo, Egypt. Born into a family of gypsies and travelling circus performers, Prophet has spent the majority of her life entertaining others and honing her craft. At least that was the case until her reality was shattered on her 18th birthday when her parents told her that in reality they were intelligence officers with the Mukhabarat and everything else was just their cover which facilitated their access to highly valued intelligence assets.

Prophet decided to follow in her parent’s footsteps, officially joining the Mukhabarat December 1st, 2106. Four years of intensive intelligence training followed, where Prophet excelled in computer hacking, foreign languages, and surveillance systems. Prophet suddenly resigned from the Mukhabarat 10 years later following the disappearance of her father while he was investigating Michael Smith, the CEO of Monolith Global. convinced that Smith has had her father killed, Prophet swears to destroy Monolith Global and exact her revenge and it is on this search for the truth that she first became aware of the Hackers Guild, officially joining January 1st, 2117.