The Lore of The Hackers Guild Part 8: The Story Behind Monolith Global Inc

Welcome back! I want to apologize for the break in the posts, but between attending cons, settling into my new job, and end of year craziness with the kids life has been busy. I hope it has been a time for you filled with game design, gaming, and spending time with family and friends.

For this week’s blog post, I will be writing the final entry in the Lore of The Hackers Guild blog series with the story behind Monolith Global Inc and its CEO Michael Smith.

Monolith Global Inc started out as a small internet security firm run by the current CEO Michael Smith from his parent’s basement in the slums of Boston, MA in 2075. Known as Monolith Security, Michael saw his firm grow at a rapid rate for the first 5 years including a couple blockbuster mergers and the construction of a new headquarters building in downtown Boston. 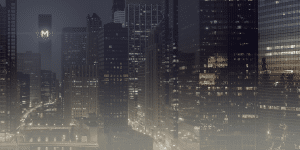 Over the next 10 years, Monolith Security continued to grow expanding into financial planning, banking, pharmaceutical manufacturing, and computer research and development. In just over 15 years, Michael had turned his small internet security firm into a worldwide conglomerate and was quickly becoming one of the world’s richest and most powerful businessman. Michael solidified his climb to the top on April 1, 2090 by changing his company’s name to Monolith Global Inc and naming himself CEO.

The next twenty years saw continued growth and further expansions. Little by little, Monolith Global was becoming the leader of every market and Michael didn’t let anyone or anything get in his way. Governments were bribed, people disappeared, and lawsuits were quickly and quietly settled.

Despite all of his success, Michael wasn’t satisfied. In truth, he had been too busy gaining power and riches to have even worried about love and family but the loneliness had finally caught up with him. In an attempt to find fulfillment in his life, he launched the Artificial Intelligence Research and Development laboratory in October of 2110 despite opposition from Frank Reed, his VP of Research and Development.

The laboratory was instantly successful, making huge strides in developing the first artificially intelligent robots over the next 5 years. It quickly became apparent that these robots had the potential of being contributing members of society, and the first seeds of world domination were planted. However, opposition to the program continued to mount, and lead to the dismissal of Frank Reed in June of 2115 and subsequent hiring of Charles Weber as VP of Research and Development and head of the Artificial Intelligence Research and Development lab.

The stage is set

Sadly, a few years later the world suffers a worldwide market crash leading to rioting in the streets, looting, wide spread unemployment and eventually martial law. For three years, the world’s leaders try to put the pieces back together and finally in 2120, it is determined that a new, unified world government will take power and attempt to restore order. Seeing the perfect opportunity, and having spent the last 5 years perfecting and amassing his robot army, Michael convinces the powers that be that this new government should be run by his robots. 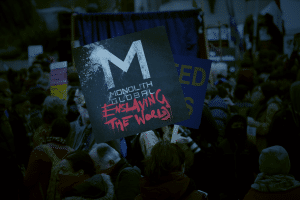 The robots are set to take power on June 1, 2120 and Michael’s dream of world domination is one step closer. It would be all but guaranteed if it weren’t for a group of pesky hackers known as The Hackers Guild. For months they have been getting in the way, and a final showdown is on the horizon.